The environmental humanities and species extinction shed light on our alienation with nature. 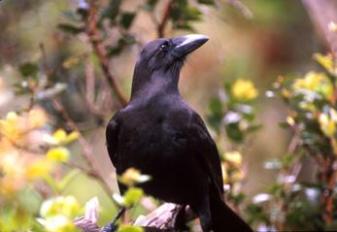 An Alala, also known as the Hawaiian crow, is seen perched on a branch. The Alala has become extinct in the wild, although some birds live on in captivity. Photo from flickr creative commons.

In a recent broadcast from Jan Oosthoek’s podcast, Exploring Environmental History, interviewee Thom van Dooren explains how a relatively new field of study strives to bridge the gap between environmental studies and the humanities. The result is environmental humanities.

In much of the existing scholarship, van Dooren explains, environmental studies have pitted natural systems in conflict with human societies. Although researchers and people at large do not generally deny the fact that the human species is among the huge number of living animals subject to the same basic concerns for survival, nevertheless commonsense sets humanity apart. Humans, after all, have a disproportionately large impact on Earth compared to other species because they exert their intelligence with such dominating results.

This intellectual separation between humanity and nature, of course, is a key example of what we call alienation: an experience of isolation from a group in which we should belong and participate.

Species extinction helps us understand the significance of our alienation from nature. When human beings recognize that a species has gone extinct, we typically feel regret and a sense of loss. These feelings might be empathic, rooted in emotional regard for the essence, or for individual members, of the species. One might also feel a utilitarian regret.

The Endangered Species Act of 1973 is an example of institutionalized utilitarian regret. The reasoning behind the strong protections afforded threatened species in the U.S. was this: Species are disappearing from the earth at a much faster rate than would occur by natural selection, and this biodiversity may hold untapped resources that we have yet to appreciate and exploit. The majority of medicines used around the world have their basis in plants, for instance.

Similarly, we can also describe species extinction as a loss of our collective inheritance. According to van Dooren paraphrasing Derrida, inheritance is not just what we feel is owed to future generations. It is also a decision that must be made again and again as we determine what should continue on and what can be allowed to fall away or die off.

The idea of inheritance signifies power, power over (and therefore separation from) the artifacts and living beings handed down through the ages. And yet inheritance also signifies connection and integration, the idea that what we pass on is intimately a part of us.

Van Dooren’s own research looks at the legacy of the Hawaiian crow, the Alala (Corvus hawaiiensis), which is now extinct in the wild but raised in captivity. This bird was hugely significant in some Hawaiian cultures, as evidenced by its role in a creation myth that arose on the big island. Island inhabitants have transformed their guilt into action, however, making efforts to reverse the habitat destruction that led to the bird’s demise in the wild and planning to one day return captive birds to their natural state. You can visit van Dooren’s blog here.

One comment on “The environmental humanities and species extinction shed light on our alienation with nature.”

Leave a Reply to The Urchins Cancel reply