Getting Sick: A hero’s journey?

This past week I’ve been laid low with a vicious cold. My ear canals seemed to swell, sealing off the outside world and locking me in a painful bubble. The cold winter air stung my throat and made my whole body feel vulnerable. My nasal passages constricted, transforming my voice into a thin, nasal creak and making each breath a shallow, leaden effort. The heat from my forehead vibrated my skull and coaxed cluster headaches from behind each eye, one and then the other.

Sickness is a time for rest and fluids and little else, it seems. And yet, I’ve found it bears some resemblance to models of the mythological hero’s journey. Bear with me. 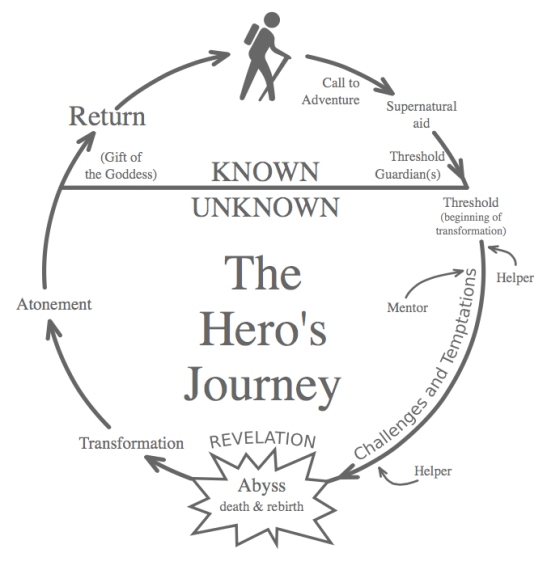 A hero’s journey entails a departure from the status quo and descent into a chaotic unknown. For the sick person, the “call to adventure” is not merely the onslaught of symptoms, but the more troubling revelation that these symptoms make regular life impossible. A sick person is a reluctant hero in this scenario, forced to cross the threshold into a painful darkness, like many reluctant heroes before her.

This may sound silly. Generally speaking, we first think of heroes as those who put themselves at risk for others. They run into burning buildings. They dip into superhuman reserves of strength, endurance or intelligence to win the day for the folks on the sidelines. And yet, our working cultural definition of a hero is much broader than this model. In 1998, Mark McGwire was widely referred to as “a hero” for surpassing the number of home-runs in a season of professional baseball. A hero can be purely self-interested, and she doesn’t have to put herself in any mortal danger.

Studies in mythology by Joseph Campbell, Carl Jung and more see hero stories as serving an important social function. Among the thousands and thousands of stories handed down to us by different cultures and expanded on today, myths are those stories that justify an existing social order and provide models for how people might live within that order. Thus, for students of mythology, a true hero is a role-model. A hero exemplifies the values and virtues held by the group, whether that’s through a simple act of charity or a risk-taking adventure.

So, if we require a departure from the status quo, a journey into the unknown and a model of positive thought or action in our heros, sickness could be an opportunity to explore this in ourselves.

The hero’s path needs a goal — something to organize the descent into chaos and define the ascent back to a new status quo. When you’re sick, the obvious goal is to regain your health in as little time as possible. However, the physical limitations of illness suggest that your descent into chaos will really be a descent into the darkness of your own mind, and there’s plenty of dragons to slay there.

Perhaps the most basic revelation a hero gains on their journey has to do with figuring out who they are, really. Our culture’s fixation on messiah-like heroes who discover they are “the one” is really just quasi-religious shorthand for the struggle for identity more generally. So what defines the identity of us mere mortals?

I think identity is a mixture of fixed and malleable characteristics. First, you are those features typically assigned to you at birth that affect how the world sees and treats you. There’s been backlash against so-called “identity politics” on the mainstage of U.S. debate, but the fact remains that sex, race and sexual orientation are pivotal in defining the lived experiences of many, in some cases limiting their opportunities or providing them with unearned advantages. It’s also a fact that many of our decision makers are not burdened with challenges due to ascribed characteristics; their advantages are rendered invisible to them, and thus they legislate in ways that assume a level playing field that doesn’t exist. But I digress.

The singular opportunity of sickness has to do with the fact that illness typically removes us from society for a time, and it restricts our physical ability to perform habitual actions (in favor of more rest). Thus, sickness can be a time to explore the thoughts that make us who we are.

In a fit of illness, do you discover your mind wading through repetitive thoughts of self-pity? Are you deeply grateful for the support or encouragement of others? Are you stricken with bitter resentment about the causes of your illness, the people or environments that may have contributed to your current pain and misery? Or are you filled with hope regarding what you can accomplish when you’ve regained your health? Did your sickness remind you of goals and meaningful activities you’d forgotten about in your busy status quo?

I traversed through all of these thoughts while recuperating from my short-lived illness. The more positive thoughts and emotions, however, became a necessary refuge from physical suffering. They reasserted the better qualities of my nature, and I made the conscious decision to dwell there more often.

I believe that all illnesses have the potential to be a hero’s journey, whether the galvanizing revelation has to do with your identity or something else. The ascent and return to normalcy need not even entail a return to perfect health. The point of a hero’s journey is that the hero can define this path for herself. It is the crucial notion of power during a time of powerlessness.

This entry was posted on January 6, 2018 by Samantha Sprole in Uncategorized and tagged hero, hero's journey, mythology, power, sickness.