When we live “authentically” we live according to our innermost desires, our spirit and character.

I could spend days trying to parse this idea. How can we distinguish between “innermost desires” and all our other desires? What is our individual spirit? Our character? Is there really such a thing as a pure entity that makes up our identity and remains separate from society, from all social conditioning?

I think I could make a convincing argument that such a pure entity does not exist. Still, living authentically is a useful concept because each of us responds to social conditioning in a different way. We each have preferences, and regardless of where these preferences originate, they craft a specific and emotional response to what other people expect of us, and what we expect of ourselves, even.

In other words, while “living authentically” is a messy concept, it helps us to take a step back from our obligations and question, “Why am I doing this?” 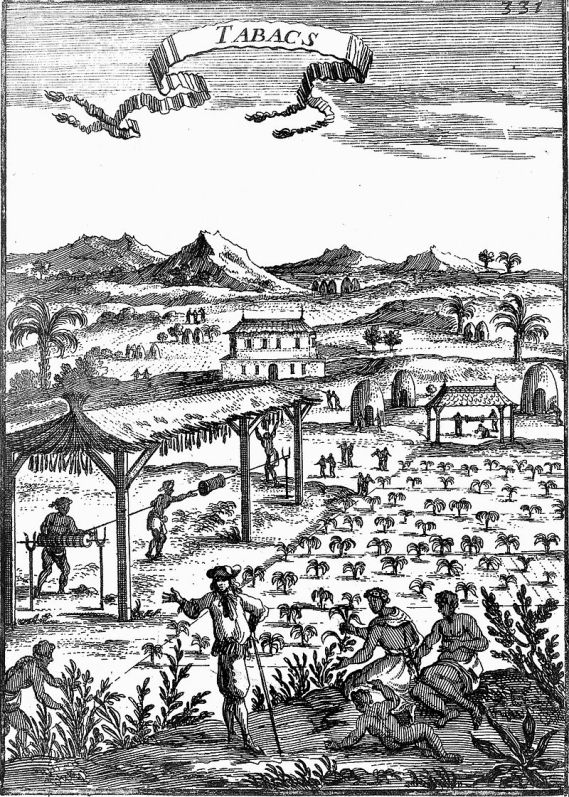 Engraving of a tobacco plantation. History: an insidious conditioner…

Heads up: I’m going to spoil big parts of a great story here. If you don’t care, read on. If you’d like to read an interview with the author about his own views on the themes of his work, plus a link to the original story, click here.

I spent three days reading, thinking about, and re-reading J.M. Holmes’s story “What’s wrong with you? What’s wrong with me?” In this fictional slice-of-life tale, we follow a young man named Gio as he interacts with old friends from high school. It’s implied that Gio and Rye, an athlete on full scholarship, have left their inner city upbringing to go to college elsewhere. Dub, a former athlete himself who apparently did not receive a full ride like his friend, is working now. We’re told he gets high every day before work. Gets high and eats Smacks cereal. It sounds pretty dreary.

In fact, the old friends are at odds with each other throughout the story. Dub is needling Rye about his sexual prowess with white women. He wants to know how many he’s been with. Rye is cagey about it.

Our protagonist Gio makes some weak attempts to get Dub to lay off, but when the subject turns to Gio’s own white girlfriend, he balks. He tries to get the subject back on Rye, but Dub senses he’s hit a nerve and goes further. Madie, Gio’s girlfriend, hasn’t been faithful while Gio’s been away, Dub says. The confrontation turns into a fight. Gio swings at Dub but misses, hitting his other friend Rolls, who was trying to keep the peace.

The friends disperse and the story picks up with Gio and Rye, walking around their old neighborhood and talking.

Outside of the first setting, a room that “was streaked with haze [from the pot smoke] like we dropped cream in a coffee,” Gio is much more thoughtful. Talking only with Rye, another undergrad, we notice his vocabulary change and his genuine interest in his friend’s experience increases.

Rye drops a bomb, the reason he was being so cagey with Dub. He was with a white woman once, he says. While having sex, she called him a n*gger, and … he liked it.

“Fuck’s wrong with you?”

I encourage you to read the story, which first appeared in The Paris Review and was reprinted in the 2019 Pushcart Prize anthology. I left out a lot of key details, some other resonant moments, but what I did recount brings home the crux of the story, as I see it.

Whiteness is a stand-in for status among this small group of childhood friends. Having sex with white women seems like an attempt to get a piece of that status. Rye jokingly describes Gio’s mixed-raced background as a “performance enhancement.”

Also, Gio seems particularly proud to be with his girlfriend Madie, whom his friends treat as a “long-lost porcelain cousin” for her ability to hang and roll a perfect joint. Besides her popularity with his friends and an intense sensual connection, it’s unclear what or if he sees anything else in her. He describes the food she makes for him as “hippie shit.”

Although it might be tempting to reduce some of these characters’ superficiality to intoxication, I don’t think J.M. Holmes wants to pin their faults on a stultifying pot-smoking culture. The existence of Rolls prevents that.

The guy friends are hotboxing a room at Rolls’s place, but Rolls clearly exists somewhat outside his social milieu. He doesn’t participate in the ribbing of Rye or Gio, and although he’s repeatedly shut down by each of his friends, he doesn’t cease cutting through their aggressive banter with some duly ignored truth bombs:

“That’s not important,” (about the debate over sexual conquests).

“Strength is life, weakness is death.”

“Fear is the center of all hate.”

And my favorite, directed at Dubs: “You add to the mischief of the world.”

Rolls puts on oldies music that Gio pauses to admire, but thinks will not go over well with the rest of the group. Rolls has a painting he did hanging on the wall that Gio recognizes is beautiful, well-balanced; a few pages before, Gio had wondered to himself if Dub still painted.

And, of course, Rolls eventually gets punched in the face.

Clearly, whiteness as a status symbol is a stumbling block for the friends. In their personal identity as being “other” than and outside whiteness, their espousal of this racial standard is self-negating. As they try and relate to each other, this status symbol at the intersection between standards of race and masculinity causes them to fight.

In a real way, they are haunted still by the legacy of race relations from slavery. Gio recalls looking at Madie and himself naked in a mirror and reassuring himself, even trying to convince himself, he “wasn’t on an auction block in front of her.”

All this is tragic, to say the least. Soul-crushing. But I think J.M. Holmes gives us clues about how we got here, and about the way out.

It’s no small coincidence that the title of this story is “What’s wrong with you? What’s wrong with me?” These problems of interpersonal connection, self-respect and authenticity are not exclusive to the characters in the story, and they’re not exclusive to marginalized communities, either. Furthermore, it’s no small coincidence that this title is echoed so brilliantly in the two-line exchange we saw earlier:

“Fuck’s wrong with you?”

And so, again, we return to this silent urging to live “authentically.” Sometimes to live with dignity we need to go ahead and speak truth to power, play the music we like, fill our canvases with paint and defy the expectations of our friends. Even if they shut us down. Even if they punch us in the face.

At least we have our self-respect.