Escape the Echo Chamber: a journey through the political spectrum

As part of my morning ritual, before I force myself out of bed, I first read the day’s reflection in the book The Daily Stoic: 366 Meditations on Wisdom, Perseverance, and the Art of Living by Ryan Holiday and Stephen Hanselman (2016). On April 18 they suggest untethering yourself from opinions. Realize that your opinions are often based in dogma and ignorance, and let them go.

I could apply this advice to opinions I have about myself, opinions about the value of travel or the last movie I watched (Tremors, 1990: vintage Kevin Bacon, chef’s kiss). But today I want to talk about politics, in particular what it could mean to suspend your political opinions and escape an echo chamber of like-minded people.

First, why bother? A popular critique I hear of mainstream US media accuses news programs of “bothsidesism“: the tendency to feature obvious lies or self-serving bullsh*t alongside earnest political discourse, and to give both sides equal weight. Could nixing your political opinions be yet another slip into thoughtless relativism?

At the heart of politics lies an impulse to organize society in the most beneficial way possible. If we think about it this way, political opinions are second-tier beliefs. These opinions are a set of ideological tools that help us identify problems and define solutions. What’s really at the heart of politics are convictions about the good we want to create in the world, and the harm we want to eliminate.

We don’t need to marry our political opinions to have a conviction about, for example, the need to preserve human rights and dignity, or to minimize suffering. I think leftists, liberals, libertarians and conservatives (etc.) share many of the same convictions about the good they want to see in the world, but they tend to use radically different toolboxes to identify key problems and solutions.

It rarely helps when you look across the aisle and you no longer see earnest convictions about fairness, justice, freedom or safety. It doesn’t help when your echo chamber has you seeing only a slavish devotion to the rich, racist paranoia, or a mindless impulse to “destroy America.” In my own experience, failing to see my political opponents’ sympathetic convictions only brought on feelings of intense frustration, indignation, incredulity and disgust.

That’s not a very helpful problem-solving mindset, to say the least.

My attempt to break out of my echo chamber is about building an intellectual toolbox and it’s about finding a psychological salve. Today I’m mostly focused on the psychology. So … it’s time to get personal.

Full Disclosure: I’m a lefty. Always have been. And it seems to me from my echo chamber on the left that contemporary politics has its roots in a psychology of anger and desperation. The left’s opposition—be it the Democratic party or the GOP—is understood to be at work for entrenched wealthy and corporate interests at the expense of the working class. We share stories of medical bankruptcy and rationing medication to survive, meanwhile the for-profit medical industrial complex rakes in ever more value for its shareholders and funnels piles of capital into political campaign coffers. The politicians then pass laws to benefit the donor class and the cycle continues, with an increasingly economically immobile underclass suffering in greater and greater numbers.

Similar stories play out in the realms of criminal and racial justice, the quest for a living wage and benefits, gun safety, public education, environmental justice, and the list continues.

That’s the story that played on a loop in my head for the first few months of the 2020 Democratic presidential primary. The problem with feeling that you’re in an epic battle of survival between good and evil has a lot to do with the psychological strain of feeling ceaselessly under siege. Your enemy will never let up. Your guard can never be let down. The battles to save your people from death and destruction will ignite your life, and they’ll burn after you die.

The shift for me came when I was suddenly able to vividly imagine a world without enemies or evil. In a way, this was a momentary and uncharacteristic brush with humility. In a way, this happened just as ambiguity, paradox and uncertainty started to feel more real, more truly part and parcel with the human condition, than anything else.

Something snapped—or did it click?—and I felt wholly dispassionate and open.

If this sounds like a privilege to you, you’re right. I don’t have any mouth but my own to feed and shelter. I’m a financially solvent introvert in quarantine; it’s pretty easy to pinpoint the source of my stress within the inner workings of my mind. That might be a spiritual imperative, but it’s also a privilege.

And so, with a growing sense of emotional detachment, I’m starting to explore the full spectrum of political thought in the United States of today. Because I’m ready. Because my intellectual blind spot is embarrassing and disempowering. Because I want to be able to talk to everyone, and to see the humanity in anyone. Because if I’m really committed to improving the outcomes of my people and planet, I want a full toolbox.

I started with books. 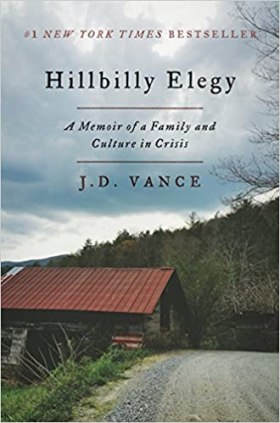 One popular book from a conservative thinker is J.D. Vance’s Hillbilly Elegy: A Memoir of a Family and Culture in Crisis (2016). Vance talks in deeply personal terms about how he broke free of the learned helplessness he says is a prominent part of the Scots-Irish/Appalachian diaspora—a unique culture of US Americans. Many of these folks followed the industrial boom to the midwest only to witness its steady decline from globalization and outsourced manufacturing.

Vance’s “conservative” appeal is really just an appeal to personal accountability. He notes that while many Appalachian people in his orbit are quick to blame their misfortunes on the vast, impersonal forces of government and the economy, they also fail to show up to work on time … if at all.

There’s at least three ways to interpret the conservative focus on personal accountability: one is at face value, another is victim blaming, and the third is with a wholehearted understanding and a principled agnosticism about whether you’ve got the full story.

You see, my purpose in this is to absorb as many political opinions as I can while attaching myself to none of them (including those opinions I once held dear). I want to hold my center in a space of dispassion and profound respect for all beings. That’s the journey. As you can imagine, its ripple effect stretches well beyond the political arena.

After Hillbilly Elegy, I wanted to go deeper. I read Yuval Levin’s The Fractured Republic: Renewing America’s Social Contract in the Age of Individualism (2016). Levin’s book is a work of pure conservative political theory, which is an altogether different pill to swallow than Vance’s stirring memoir. Still, in keeping my center in that space of neutrality and respect, I came away from the final pages feeling that I’d gained … something. Perhaps it was complexity. Perhaps it was uncertainty and confusion. But if I’m able to hold a stance of openness, then I find a psychology of addition much more satisfying than one of rigid permanence or obstinate and embattled simplicity.

I think the self-help gurus might call this growth mindset.

At any rate, Levin’s book stretches the primacy of personal accountability to include an emphasis on local institutions as engines of collective problem-solving. He generally disdains the idea that the federal government can adequately relieve social ills because, for one, national solutions tend to be one-size-fits-all; as such, these solutions are unsuited to our diverse communities. The hierarchical nature of top-down problem-solving chafes his spirit, and he looks to the grassroots for answers and innovation. In Levin’s vision of the future, competitive local problem-solvers (churches, municipal governments, civic groups and workplaces) provide people with a wealth of options to overcome their struggles and realize their dreams; everyone operates in a marketplace of ideas guided by the aspirational values of a free society.

The chastened lefty in me wants to start listing the limitations of this perspective, especially in light of the global pandemic bearing down upon us, but that would be beside the point. (You can find a brief critique of the book in my Goodreads review). One of the chief lessons I learned from Fractured Republic is that I afford myself little access to reasoned conservative thought on the issues of the day, and I’m up for changing that.

Good journalism is more and more a precarious industry, and it’s worthy of our support. Also, I’m sick to death of the look and experience of free online news. Good riddance. To facilitate my escape from the echo chamber, I decided to subscribe to three periodicals—one center(ish), one left, and one right.

I don’t want a daily newspaper; this is not the kind of project that requires hours of attention each morning (my regards to Noam Chomsky), and I find it psychologically beneficial to detach my focus from the daily tide of events beyond my control. Instead, I want a steady trickle of infusions of perspective.

I recall a documentary film saying that Chomsky reads eight newspapers a day. Something like that. It stuck with me. (Photo credit: “Esoteric Mural” by Terry Robinson, licensed under Creative Commons)

I subscribed to The Week (US edition), The Nation, and National Review (Levin described this last one as the “flagship” conservative publication in the US). If you have any better suggestions, leave a comment.

The final step in my new political groundwork involves, of course, social media. For me this means expanding my circle of people and weaning myself off snarky but satisfying meme culture.

It’s much more difficult to remain dispassionate in the social media sphere than it is with a book in your hands. Social media traffics in emotional manipulation, like the soft sell in marketing, and most of us have learned to communicate in this language by heart and by habit. Sometimes it’s important to hear the emotional appeal, especially when it contains an example of the multitude of suffering that deserves your full attention and a legion of helping hands.

But mostly social media is an intellectual and emotional hellscape, and a casual browsing experience is like a vigorous jog through a mine field when your object is to remain centered in neutrality and respect. My general advice for social media use, as it pertains to political openness, is this:

I could go on and on, further exploring how staying present and mindful is a huge part of this journey, but I’ve gone on long enough. The point is this: Move beyond your will to be right and toward a willingness to be open-minded, and you move closer to liberation. At least, that’s the plan.